While we are travelling we hope to do lots of walking, particularly in New Zealand (and also, I guess, around Walt Disney World). We have been trying to get the boys out regularly for walks on the South Coast so that they are well prepared for long days on their feet.

On Saturday we took part in the annual around Guernsey ITEX Walk. The whole event is 40 miles, but the first 20 miles takes place on the South Coast cliff paths which consists of many climbs and descents. Nicola and I have done the whole walk in past years (when Peter was 21 months old I carried him for the first 26miles (10 hours) and then finished the rest on my own), but this year, for the first time, Peter and Joseph were walking.

Joseph managed as far as Jerbourg point at the southwest tip of the island - a walk of about 4 miles including at least three climbs from sea level to the top of the cliffs in addition to several other undulations - not bad for a three year old.

Peter kept going until Petit Bot with a total distance walked of 8.6 miles and would have easily carried on if it hadn't been for the temptation of going down for a run about on the beach- very good for a six year old.

Luke - well he made it to 8.6miles too, but on my back. I think he consumed more calories than he burned as I passed back snacks to keep his spirits up.

Photos can be found here. If you're wondering about the darkness and the look of tiredness in some photos - we started at 4.45am.
Posted by Dave, Nic and the boys at 20:08 1 comment:

We arrive in Montreal at 19.45 (local time) on Sunday 31st August, staying 1 night in the Novotel Montreal Airport. We then fly out of Toronto on Friday 19th September. In between - who knows? We will be visiting university friend Chris McCarthy in Ottawa and going to see Niagra Falls. 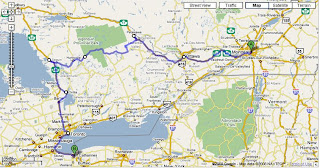 This map shows the first draft plan which I put together, but it is likely to change considerably once we have feedback from those who've been. The main thing I was trying to get here was a bit of decent camping, parks and lake views. Google maps puts the route shown at 740 miles which I put at about 8 days of driving (allowing plenty of time for detours, stops and to allow for time to set-up and break camp).
Posted by Dave, Nic and the boys at 20:29 No comments: