The drive from Radiator Springs to Grand Canyon was very straightforward. Turn right out of the hotel carpark, after 80 miles take a left, continue straight for 60 miles. In addition the roads were generally very straight (think Roman), quiet and fast. The terrain varied little, mainly flat empty desert (strangely, when you drive in the desert you need to keep your headlights on during the day, it is surprisingly hard to spot other cars on the ribbon of tarmac ahead without them).

The dull view dramatically ended when we reached the South rim of Grand Canyon. Before heading to our hotel we stopped at Mather Point and gazed in awe at the view of the canyon. Despite reading up on it before going there it was still a surprise to look upon it and take in just how amazing it is. At an elevation of 8000ft on the rim the air was noticeably thinner than Las Vegas (only 2000ft above sea level), the view ended around 1 mile (5300ft) lower at the Colorado River.

Our hotel was a lodge run by the US National Parks Authority in Grand Canyon Village, a fairly spread out village which included a small store useful for essential items (according to our guidebook) - which turned out to be a supermarket about the size of Safeway and holding considerably more stock. Indeed we even managed to find a propane cylinder which fitted our obscure (in the US) European camping stove, so home cooking was back in business. Our original camping plans were shelved when we saw that overnight temperatures were forecast at around freezing (compared with about 14C on the Canyon floor).

We ventured out on a number of walks over the next three days including one down Bright Angel Trail which took us down into the canyon a little. With Peter and Joseph walking I carried Luke on my back - it was a bit nerve wracking as the drops are considerably further than the South coast cliffs back in Guernsey. We managed to also take in two sunsets and one sunrise on the Rim (despite the cold temperatures when the sun was tucked away). 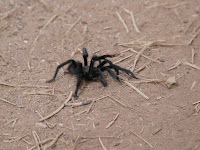 ties to earn their badges. Wildlife spotted included Squirrels, Ravens, Chipmonk, Deer, Horned Sheep, Elk, Lizards and Mules. On one walk through the forest Peter almost stepped on a rather large and hairy spider which we took a photograph of - a park ranger later confirmed that it was a tarantula! Peter also claimed to see a California Condor (mum and dad weren't quick enough to confirm the sighting). After completing their tasks and attending a course on fossils (including finding real fossils on the rim) and a talk on Condors the boys took their Junior Ranger Oath and received their badges on the fourth and final morning.

Grand Canyon is one of the few places we've been on the trip where we didn't really feel ready to leave yet. There is so much more exploring we would have liked to have done and we plan to return (sans enfants) to hike across to the North Rim one day in the future.

From here we now head back to Las Vegas on route down to San Diego (with a couple of stops to pick up "lost & found" items on the way).