We have had a quiet few days since the Grand Canyon. We stopped off for a night in Las Vegas for to break the journey to Palm Springs.

Our journey to Palm Springs was epic...by far the worst journey yet. The first hour involved losing the GPS (left in the hotel bathroom accidentally), a driving de-tour to see the Cowboy sign, stopping off at a garage to see if they could fix the front indicator, forgetting to get petrol until we were on th e road which resulted in another detour...an hour after leaving we could still see the hotel about half a mile away. I could have cried. 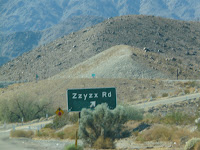 A further five hours, four toilet stops, twice through the Thomas the Tank engine DVD and once through the film Short Circuit, seeing a place called Zzyzx and after having three oranges confiscated at the California State line and we arrived at our hotel...which more than vaguely resembled a building site (although our room was fine).

The next morning began with a trip to Walmart for essentials then in the afternoon we went up the Palm Springs Tramway to the Mount Jacinto Park at the top of the mountain where we enjoyed the views and went for a short walk.

Luke then gave us the first "in-hotel vomiting" experience of he trip as he was struck down by a tummy bug. We got him settled eventually and decided in the morning to push on to San Diego first thing (which meant we did not really get much of a look round the shops etc in Palm Springs). 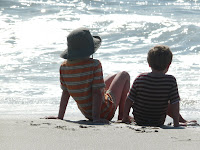 Our journey to San Diego was a lot less fraught and David and I even got to listen to some music. We arrived at lunchtime and had a picnic on the beach then found a hotel in La Jolla (a trendy suburb north of San Diego). Luke was still not feeling well and so it was a quiet day in the hotel. We opted to get a suite which was a bit more expensive, but it gave us some more space and a kitchenette. 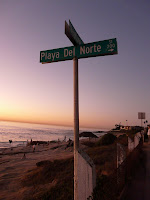 In the evening we took a walk down to see the beach at the end of the road. It was spectacular, the sun had just gone down and the sky was beautiful, it was nice to be back by the ocean.

Luke continued to be sick on our first night in San Diego so our second day was another quiet one, the highlight of which was seeing some seals on a nearby beach. By the end of the second day things had taken a turn for the worse as David, Joe and I had also caught the vomiting bug.

So I am spending my thirtieth birthday feeling rotten in our hotel room, with Joe and David intermittently being sick...I thinkＩwill save my presents for tomorrow and hopefully my thirties can only improve from here!

Happy Birthday take two, I hope you have a better day on your second day into your Thirties.