On to Atlanta and Vegas

We have finally moved on after our epic stay in Florida. The worst part was having to pack up all of our things and take the tent down - quite a thought after spending so long in one place. First job on the morning of departure was to get rid of some of the equipment we wouldn't have space to bring with us. In true Guernsey hedge-veg style we set up our wares by the side of the road and by the time we had packed up and left we had sold the fridge for $20 and given away a camping stove, lantern, football. The only additions to our luggage were the inflatable mattresses and pump which we thought it worth holding on to, although our luggage seemed to have grown more than that. I think that we lost the knack of packing tightly which we used when we were moving around more in Canada.

Atlanta doesn't really count as a place we visited. In fact we had no intention of even stopping there when we booked our Delta flights direct from Orlando to Las Vegas. What Delta failed to mention when we booked was that they didn't actually fly that route so when we went to confirm the flights a swift itinerary change was required. It was the shortest stop anywhere on the trip with just 50 minutes from landing to taking off again (due to the late arrival of our flight into Atlanta). It wouldn't have been too bad if we were staying on the same plane, unfortunately we had to change onto another plane at another terminal so it was a bit tight. The flight to Las Vegas was almost boarded when we arrived panting at the gate. 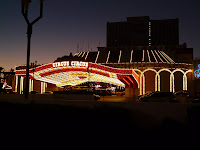 So we arrived in Las Vegas three and a half hours later than the time we left Orlando thanks to a three hour time-zone shift (Luke was definitely still on Eastern time for the next 24hrs!). We managed to wangle a free upgrade on our hire car to a people carrier. The boys love the DVD player in the back but I think they'll soon grow bored of it - if that happens we'll probably buy them a DVD to put in it.

Vegas is an amazing place. It's not a place which seems immediately obvious for bringing kids to (we keep expecting Peter to ask awkward questions about the men advertising "ladies brought to you in 20 minutes" for sale in the street), but there's plenty of activities less sinful than drinking, gambling and sex to fill our few days. 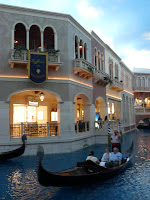 The hotels are just amazingly large and, bizarre as it may sound, we are spending most of our holiday here visiting other hotels. The hotels are packed with shops, casinos (obviously) and various other sights and attractions. Our hotel has a theme park on the second floor, a circus on the third (and a McDonalds), a small shopping mall and at least thee casinos. With only 3,800 rooms it is one of the smaller hotels on The Strip. The most impressive we have visited is the Venetian, which has a canal lined with designer shops marble bridges and a large piazza filled with cafes, restaurants and entertainers. The ceiling of this room is painted as a blue sky with fluffy white clouds and the lighting makes it feel like you are really outside.

More hotel visiting tomorrow and then we head out into the desert to see the Hoover Dam, Boulder City and the Grand Canyon (probably while the kids watch Toy Story in the back of the car).

Photos (including our favourite hotel shots).