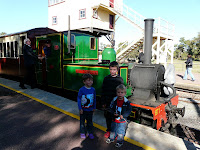 Nancy and Robert had planned a bit of a surprise for the boys while we were over as there was a “Friends of Thomas” day on at a local park during our visit.  David and I thought it would be just the sort of thing Joe and Luke would love and we decided to keep it as a surprise until the day.  Nancy and Robert picked up a few Thomas things during the week and I set up a Thomas themed breakfast table for Sunday morning.  The boys got a surprise when they got up and were very excited to hear they were going to see some trains. 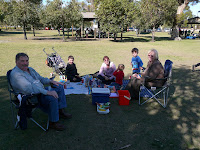 We headed down to the park first thing and followed the crowds of small kids and parents down to the station.  We did three train rides before lunch and stopped off to see model aeroplane flying and remote control car racing (very popular with Peter and Luke respectively).  When we arrived back at the station before lunch it was chaos…there were hundreds of people waiting for trains.  We made a quick exit through the crowds and found a shady spot for
our picnic. 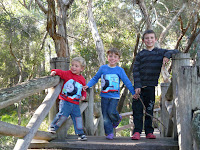 After lunch we decided to walk to the last train stop, rather than face the crowds on the platform.  It was a nice walk through the bush and alongside a pond.  When we found the station we had a look at some old buses and fire-engines which were on display and then watched the train in the station before heading back (on foot).
Luke loved the day, he is mad about Thomas and really enjoyed seeing and riding on the trains (although was not too keen on their whistles!).  Joe also had a really good day as he is fairly train mad too.  Peter was being our ‘bored teenager’ this morning, appropriately dressed in black and moping about complaining and muttering something about trains being boring…however he seemed to cheer up after lunch (maybe because we didn’t go on any more trains) and overall I think he enjoyed the day.
Photos here
Nic
Posted by Dave, Nic and the boys at 14:58