Niagara and the falls 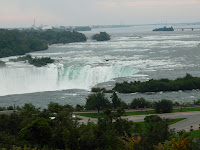 Our stay in the luxury of the Hilton at Niagara-On-The-Lake ("NOTL") was extended to two nights when I realised the discount and airmiles I could get with my corporate membership and when Nicola realised that they did free cookies (freshly baked.....mmmm).

We had a lazy first morning in the hotel, keeping out of the weather which was similar to what we could have experienced in Scotland for a lot less expense! We finally ventured out before lunch for our first sight of the Falls, taking the 'scenic' road down the Niagara river. A combination of mist and trees mean that despite driving only a few metres from the canyon-side we had no sight of the river. We parked up (after a quick phone-call to the bank to extend the credit card limit to cover the parking fees) and as if by magic the heavy rain which had persisted all morning suddenly lightened to a sprinkling. The first view was still a bit disappointing with the spray and mist being particularly thick, but it was still cool to think that we were actually looking down on Niagara Falls. 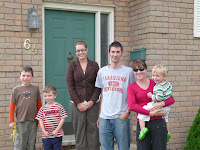 Chris and his wife Erin for lunch and caught up on their recent wedding and our recent/future travel plans. Chris and Erin kindly offered us some accomodation over the weekend at their place in St Catharines (very close to NOTL) which helped redress some of the Hilton-related overspend (if we had stayed a month we might have recovered the parking overspend). Thanks guys - your hospitality was much appreciated and we hope you're enjoying having your house back! 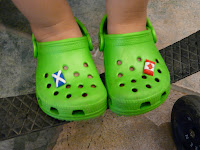 around the shops, since the weather was still not conducive to seeing the Falls. Luke finally caught up with Peter and Joe in the footwear stakes as we gave in to "pester power" and bought him his own pair of bright green Crocs, whilst the older boys bought Croc decorations. Luke's Crocs were also selected as our "flag pinboard" recording the countries we have visited (see photo).

Sunday morning saw my first decent run for several months as I took part in the local Terry Fox Run, a major cancer fundraiser throughout Canada. It was a 10km fun-run and not a race, so I felt I shouldn't go off too fast. I jogged with a group of guys and girls for the first 5km lap and then had a solo second lap as I blew away a few cobwebs. The weather had finally recovered and by lunchtime it was up in the high 20s, possibly low 30 degrees, so we headed back to Niagara Falls for a good old look (and another mugging at the car park). After taking in the falls from above, we ventured down to "Journey Behind the Falls" - a series of tunnels going down behind the falls and offering a close up (and very wet) view. Fortunately the hot weather soon dried us off and we headed up into the tacky centre of Niagara Falls for afternoon snacks and a wander.

By Monday (today) we weren't sure if the weather was going to improve enough to camp again or not and we had no major plans. We decided to take a drive down to Lake Erie, our second great lake (and the one featured in Dr Seuss's 'The Lorax'), to see if that might yield a good camping spot. It seems that most of the beach-front is privately owned and after driving a few miles alongside the lake we didn't manage to find any nice stopping points (there were no humming-fish spotted either).

We headed back along to Fort-Erie for a lunch and playpark stop before heading back up to Niagara. As the skies darkened we decided to check out some cheap motels rather than campsites and found a place willing to haggle to a good deal (it's actually quite nice and Joseph and Luke have already had a good play in the heated pool, located in the middle of the motel carpark).

Tonight we are planning our last visit to the Falls to get a nightime view (the Falls are illuminated by night) before heading back up towards Toronto and the last section of our Canada experience.

As always, Facebook photos are ready for viewing (if we can get any decent night-time shots we will add them here later).
Posted by Dave, Nic and the boys at 00:15