Port Hope then Toronto and the CN Tower

After what seemed like a never ending drive yesterday, we were keen to pack some more activity into today. We hit the road at 8am and headed into Port Hope.

By the time we arrived there David and I were suffering from the peculiarly British need for a nice cup of tea. Our tea drinking has become problematic since leaving the UK. Our first hotel in Montreal had a coffee machine in the room, but no kettle, our friends in Ontario had a drawer full of teas...all varieties except English Breakfast, we are becoming accustomed to the slightly strange look you get when you ask "Do you do tea?".... All in all we did not hold out much hope for a decent cuppa to kick start the day! 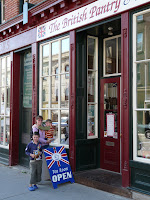 We decided to have a quick walk up the main street in Port Hope and to our immense delight we found "The British Pantry Tea Room and Shop"...it was like a dream come true. We raced inside and ordered a pot of tea for two before behaving like stereotypical Brits abroad and marveling at the selection of "British Foods", which made us realise how many of our "staples" we are missing.

After our cuppa and a wander back down the main street we took the boys to the park for a run about. Then we drove down to the shore for our first proper look at Lake Ontario.

It surpassed all of our expectations and as we stood on the shore and looked out at a vast expanse of water it was hard to believe this was not the ocean. Suddenly, Guernsey seemed very small and the world felt very big.

We walked along the shore and then along a lakeside path and Peter and Joseph threw stones into the water, found a grasshopper, a caterpillar and a frog...to them it was just another playground.

After a picnic lunch and another park visit we decided to motor on down to Toronto for the afternoon. We will pass back through Toronto next week, but I was keen to get a feel for the city and the CN Tower was a must see.

We drove right into Toronto and parked near the tower, which gave us a little walk through the downtown area, giving us all a chance to marvel at the tall buildings. We went up the lift (58 seconds to get to the observation deck) and looked out over the city. I read the information boards describing how I was in the tallest tower in the world, David marvelled at the birds-eye view of planes landing at Toronto City airport and the boys looked out for trains on the railway lines below. While I enjoyed the views from the tower I was uneasy at being in the tallest building in the world, watching planes below, on September 11th! Call me neurotic, but I was glad to get back down to street level.

Tonight we are in Niagara (staying in the Hilton...the camping and the budget has been temporarily abandoned after frost overnight last night) and we are visiting the Falls tomorrow...watch this space!

Facebook photos here.
Posted by Dave, Nic and the boys at 02:55