Romp in the swamp 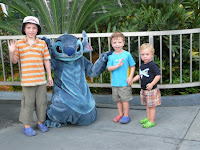 I think my brain is getting scrambled. I used to have a keen eye for detail when I took my brain to work every day (well I took it most days at least). It wasn't until we were packing our bags for the flight to Orlando that I noticed that Sail or Surf had sold me an odd pair of shoes (odd as in shoes which don't match each other, not odd as in the sort of shoes that an odd person might buy). I have been wearing them for about four weeks. Maybe Joseph's odd-Crocs idea was actually an attempt to impress dad. Since I got away with it so far (and also because they are probably the only trendy (read expensive) shoes I ever bought) I think I'll keep them anyway. Hopefully we'll be having mostly sandals weather anyway.

We left our hotel in Toronto in the dead of night. Despite the extra bits and pieces we seem to keep picking up (mainly toys) we still managed to fit all of the kit into our four pieces of luggage. We waved goodbye to Toronto, and Tim Horton, on our departure to Orlando. To Nicola's surprise both Air Transat and our flight did exist and the airline had not gone out of business. The flight was a mainly uneventful three hours.

We had a great hire car pick-up – they let you choose your own car. We managed to choose one which had plenty of space for all of us and our luggage which was a relief after the squeeze we had in Canada. Not sure about all of the buttons in the car - I accidentally phoned someone using the rear-view mirror! One feature which is great is being able to start the engine using the remote control – perfect for getting the air-conditioning running before you have to get into the car.

We are now at Walt Disney World in Orlando, Florida. We are staying at the Fort Wilderness Campground which is a fairly large Disney resort. Most of the residents are 25 stone Americans in their six wheel double cab trucks with enormous air conditioned Winnebagos. The camp site has three bus routes running within it end to end to save the poor Yanks' legs, but we prefer to walk (Luke could walk end to end).

The sites are very well laid out with a parking space (of course) and a large square shingle pitch which we have put our tent to the back of, giving us lots of space to play in front (photo). Every site has taps and electrical sockets and they back on to a swamp area which separates the sites. When we arrived the swamp was pretty dry so the kids have spent a lot of time playing down there and endlessly catching frogs and lizards. The site is given some shade from trees (in which we regularly have woodpeckers).

On the afternoon of our third day the rain arrived and continued heavily for several hours before giving up. The main effect was that the swamp filled up with water so we lost our short-cut to the shower block. The frogs seemed to be very happy, they croaked loudly all night and woke us up with their singing at about 4am.

On arrival we headed straight out to Wal-Mart and loaded up on stuff to make our three week stay more comfortable (airbeds, fridge, a new camping stove). We found out the US uses a standard propane fitting which differs from every other country in the world so it was either find a specialist camping store or another stove, we went for the easier option.

David and Wilma (“the In-Laws”) arrived a couple of days after us (after a much more traumatic journey from the UK) . They are staying in a campsite cabin, which means we have an air-conditioned second home for part of our stay – so there is less need to enter the tent during daylight hours (it must get well over 40 degrees in there, it would be interesting to measure it on a thermometer).

So we're all kitted out for three weeks of sunshine, theme-parks, sunshine, Mickey Mouse, sunshine and space shuttles. Did I mention that Florida is “the sunshine state”?

Photos are being added here.