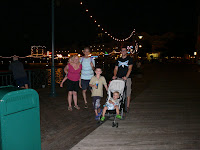 Florida so far...10 days, 4 theme parks, 2 water parks, 3 and a bit birthdays.. 7 people who are almost theme parked out (and we haven't even started the Universal parks yet!).

We are almost half way through our stay in Florida. We have been to Disney Parks most days and have ridden all the big rides and a lot of the smaller ones and have seen a couple of stage shows/performances. A quick rundown on the most popular rides to date...Luke enjoyed Living on the Land, a boat tour through some greenhouses in the Land Pavillion at Epcot. Joseph's favorite ride was the Buzz Lightyear Space Spin at the Magic Kingdom. Mission Space at Epcot was a surprise favorite for Peter and he has been on four missions to Mars so far! David enjoyed the safari at the Animal Kingdom, where we saw elephants, giraffes, flamingos and a host of other animals. For me I enjoyed Soarin' (again at Epcot). 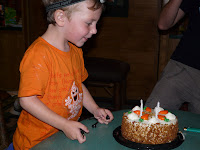 Luke has turned two and Joseph has turned four on this part of the trip. For Luke's birthday we spent the day at the Magic Kingdom and had a birthday dinner and cake at home (My parents' Cabin on the Fort Wilderness campsite). Joseph spent his big day in Animal Kingdom and then we went out for dinner at the Clam Bake at Cape May's before returning home for cake. Joe loves carrots and even dreams of becoming one(?) so we found the perfect cake in Walmart, a carrot cake, complete with carrots iced on the top...he loved it!

I was surprised by David with an early birthday present of a night away in a hotel, which was a lovely relaxing 24 hours! My mum also celebrated her birthday (spent in Epcot), so we have had a lot of cake in the last week!! 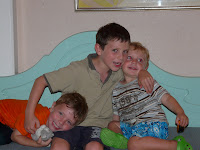 The weather here is hot and although the boys are coping well with it, we are slightly concerned about how much hotter it will be in the Grand Canyon/Nevada Desert/Death Valley, maybe we will have to adapt our plans if the temperatures prove to be too much for us all.

We have a more reasonable sized car on this part of the trip, so it is less like trying to complete the Bedlam Cube every time we want to go anywhere. The main transport related problem which we have faced (apart from David driving with the Parking Brake on) is my navigational abilities (or lack of them). Today after another navigational failure (correct road, wrong direction) we decided to invest in a TomTom Sat Nav to get us from A to B...phew I can relax now and we can both blame the TomTom when things go wrong! 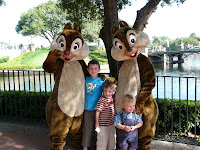 We have taken loads of photos, the boys have met Chip 'n' Dale, Stitch and Goofy so far, but the internet connection here is rubbish and we have not been able to get any photos up yet on Facebook...will try to have a word with Mickey about getting some wireless internet installed here....