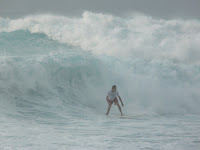 Our last two days in Hawaii broke the beach-lunch-beach format a little bit. On Thursday we headed up to the North Shore to watch some top Surfing on huge waves (part of the Vans Triple Crown of Surfing - apparently).

Friday was our last day and it took most of the morning to break camp and get everything packed into the car. There was still some time for the boys to play on the beach where they had fun building a collection of sticks, coconuts and "eyeball-beards" (large round nuts which in pairs you can pretend are eyeballs, but if you get lots and hold them on your chin you can pretend to have a beard). 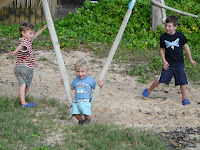 The boys were keen to make sure that lots of the sticks, nuts and flotsam they had collected were packed with our belongings. We explained that taking these things into New Zealand would not be allowed because of their strict border controls (more of which later) but mainly because we just didn't have the space!

We headed back down the coastal drive which on the way up had been stressful, but with 12 hours 'till our flight we had more time to enjoy the scenery (it was also less cloudy than on our first day). 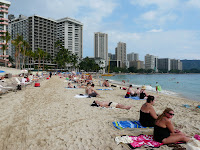 We made our one and only visit to Waikiki (in Honolulu) and the boys played for a while on a slightly busier beach. Later on in the day we met up with Alan (a Scotsman I worked with at BWCI who, like us, is a Heriot Watt Alumnus) and Nat who are on their own slightly quicker round the world trip (3 months) for a wander around the main streets and a meal at the International House of Pancakes.

Our Friday night flights took us first to Fiji, by which time we had crossed the International Date Line meant we landed Sunday Morning in Fiji having experienced only an hour or two of Saturday 15th November. Nicola has suffered significant confusion as a result of losing a day (especially a weekend day) and we discussed how fortunate it was that the IDL fell in a sparsely populated part of the world rather than in the middle of Europe, for example, and the interesting situations which might arise. In fact reading further about the history if the IDL (see wikipedia) it seems that there have been a few interesting situations when countries have moved from one side of the line to the other and in the case of Kiribati which at one time straddled the IDL. 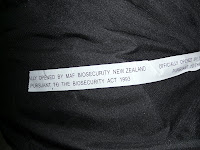 We finally made it to New Zealand after a further flight out of Nadi and with just customs and baggage collection we were almost home and dry. We knew that because of strict controls on what can be brought into the country we would have to 'declare' our tent at customs. In fact although we had swept it out as well as we could and cleaned the tent pegs, we suspected that it would probably be confiscated, so we were prepared for that fate. However, after a thorough search of the tent bag I was led away with the tent to a "biohazard" facility where with the help of a customs official we attempted to hoover the bag and contents clean! The customs officer, however, thought when I said "tent" that we were talking about some small piece of kit (our rather large family tent is, it turns out, longer than the biohazard cleaning room in Christchurch airport). After calling for reinforcements the tent was moved back out to the customs hall and with the help of all of the on-duty customs officers it was soon cleared for entry. Nicola prudently decided it was best not to capture the moment on camera!

Having arrived in Christchurch on a Sunday we have to endure a wait until Monday morning before we can pick up the motorhome and find our just how little space we have. It is possible that the tent might not make it much further anyway!