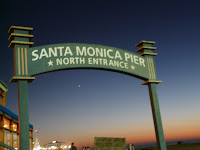 The drive north from Newport to Santa Monica wasn't quite as planned. Because of the fairly short distance we planned to cover we attempted to stick to the coastal "Route 1" rather than going straight for the highway. Sadly this particular part of Route 1 is pretty much 100% industrial, passing directly through oil fields (where we saw oil pumps bobbing up and down like I'd expect to find in Texas) and refineries - there were few trucks on the road and it was a battle to avoid being squished by the huge trucks. Realizing our mistake we soon re-routed up to the main highway.

We rejoined the coast at a place called Redondo Beach and found a nice picnic spot for lunch (with the obligatory playpark). It seemed to be Kindergarten home-time and the park was busy with moms and kids playing and having lunch. It was refreshing to find ourselves amongst "local" people rather than groups of tourists for a change, this was the real suburban USA.

From Redondo beach the drive up to Santa Monica was fairly short, but our planned campground was a little further up, past Malibu. Having read about the campsite on the internet it sounded like an easy drive back into Santa Monica, but in reality the road was slow and the drive was a further 40 minutes (and the advertised 10 minute drive to the coast was more like 20 minutes). Having caught a glimpse of Santa Monica on the way past we decided we would prefer to stay down there so headed back and found a nice motel on Santa Monica Boulevard (the western end of the old Route 66). 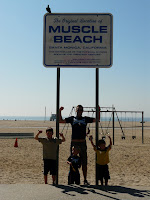 For the first time since we were in Disneyworld we were less tied to the car, Santa Monica having a comprehensive and frequent bus service. Santa Monica Pier and the beach to the North provided plenty of entertainment for the kids (including a ride on the Pier's solar powered big-wheel). On one afternoon we headed to the beach on the South side of the Pier and strutted our stuff at the orginal Muscle Beach. Another day we took the bus down to Venice and took a stroll along the seafront to see the strange population which continues to promote CND, peace and love(man). It was a bit like being in the wrong decade. 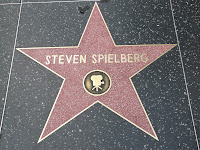 On Thursday we headed in to Hollywood which was only a 10 mile drive from our hotel. The first glimpse of the Hollywood sign on the hill was fairly cool, but otherwise the first impression of Hollywood is that it is just another US city made up of a huge grid of streets. Hollywood Boulevard was similarly unimpressive as we joined it from the Eastern end. It was a bit like driving down any un-famous London street, but with stars on the pavement. Towards the Western end of the Hollywood Walk of Fame the street became a bit more impressive and we stopped to join the hordes of tourists staring at and photographing the pavement. 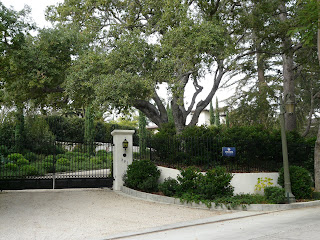 and famous was fun - the homes were clearly pretty special, but the truth is you can't see much other than imposing walls, gates and hedges. Elvis Pressley's old place was getting a bit of a refit, seems the new owners obviously didn't like his taste in soft furnishings. Just along the street we saw the houses or former houses of Walt Disney, Barbra Streisand and George Harrison. We finished our tour at Rod Stewart's place, the only one star's house we saw sporting a presidential election poster (Obama/Biden). We needed to do a quick U-turn and were sure Rod wouldn't mind us turning in his drive, if he ran out to stop us we were going to shout "it's ok, we're Scottish".

On the afternoon of the Hollywood visit we stopped off at the Getty Centre. The Getty Centre is an enormous museum of art which was built in the 90s at a cost of $1bn for the buildings alone. The artwork collection is likely worth considerably more including original paintings, photos and sculptures including Van Gogh, Monet, Picasso and loads of artists that cultured types might ha 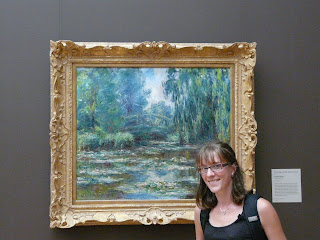 ve heard of. To be honest there were a couple of pretty poor efforts that had sneaked in and I know I could have done better, but it's fair to say the overall standard was pretty high. It was amazing how close you could get to the famous paintings hanging on the walls, there was not barrier or screen to separate visitors from the art, all I could think of as I stood inches from Monet's "The Bridge over the Water Lilly Pond" was how easily I could have put my fist through it. You'll be glad to know I didn't.