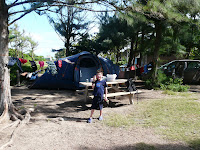 We are in the middle of the most relaxing week of the trip so far. We are camping at Malaekahana on the north-east of Ohau, Hawaii. We had intended to do some sightseeing around the island, but after the 30 mile trip from the airport taking an hour (due to traffic and low speed limits), we have decided instead to base ourselves at the campsite and have more of a beach holiday.

We are staying at a rather unique campground, where chickens roam freely, cats run around, the toilets have no lights and the showers are outdoors. The campsite feels like a run-down hippy commune, so we feel quite at home! We even had some professional runners camping next to us, but unfortunately we didn't discover this until the day they were leaving...much to David's disappointment!

We are on the windward side of the island which can make the tent a bit noisy at night, with the noise of the wind and the sea keeping us awake some nights (the kids sleep fine!). During the days we have mainly had lovely sunny weather, with a few rain showers, but these tend to pass quickly and the temperature has stayed high. 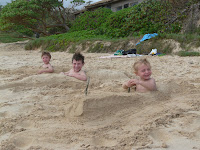 ur tent is pitched about 40 meters from the beach and we have spent most of each day on the beach, coming back up to our tent for lunch and dinner. The boys are having a great time, splashing in the sea, getting buried in sand, building paddling pools, watching crabs and collecting driftwood and coconuts. Last night we had a campfire and roasted marshmallows, which was great fun. It gets dark here around 6pm and stays dark until 7am so the campfire also provides some light in the evening. 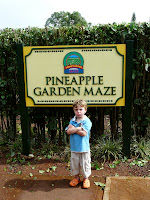 e have visited one of Hawaii's tourist attractions, The Dole Plantation where you can see pineapples growing and more importantly we visited the World's Largest Maze...a big hit with Maze mad Joseph! It took us about 75 minutes to do the maze...so we did not make the Top Five Times, which were all under ten minutes!

We have two more days of relaxing on the beach and recharging our batteries in Hawaii and then we are off to New Zealand.