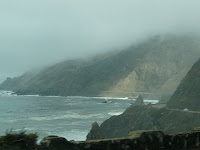 Driving route 1, from LA to San Francisco, where the mountains rise majestically from the Pacific Ocean and the views are spectacular. Unless there is fog. Then it is surprisingly reminiscent of the A-701 road from Dumfries to Edinburgh.

We stopped on Saturday night in San Luis Obispo where we had an enjoyable belated celebratory meal for my birthday. Sunday was the scenic drive up through Big Sur, but the visibility was appalling, we saw neither the mountains or the ocean for most of the drive! We enjoyed the drive despite the weather and stopped off to see some elephant seals along the coast.

Sunday night was spent in Santa Cruz, famous for being "weird". However, we did not see much evidence of the thriving alternative community promised by the guidebook, it was more of a sad run-down seaside resort with a few homeless people begging on the pier. What we did find in Santa Cruz (that was not mentioned in the guidebook) was that the local sea lion colony like to sit on the wooden supports under the pier for an afternoon snooze...and a bit of a chat to each other. We all loved watching and listening to them! 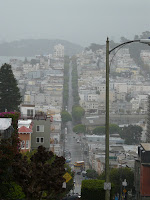 Today we arrived in San Francisco and so did the fog! We managed a quick walk round and some lunch before the rain started and the fog rolled in, I think it is following us! We took a drive round some of the very scary steep streets and went to have a look at the Golden Gate bridge (which we could just see through the fog).

We are here for four nights (leaving on Friday morning) so hopefully we will get at least one day of sunshine and I just hope the fog does not follow us to Hawaii!