Settling into our new home

We have had a busy first few days in New Zealand. On Monday we picked up our motorhome which we will live in for the next six months. I was very nervous about seeing our new home for the first time, we bought it several months ago after finding it online and seeing a few photos. We had a bit of guidance from our friend Dean as we have zero knowledge about motorhomes and it looked like a great deal, but I knew that whatever it was like we had to live in it for the next six months and I was apprehensive! 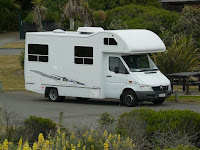 When David arrived back from picking it up, he was smiling and I was too once I had looked around. Inside it was spacious (a big concern we had was how cramped it might feel), in reasonable condition and felt really quite homely. The boys loved it and were keen to try everything out...including the toilet and shower!

The next thing we did was rush out to the nearest mall to kit ourselves out. After almost three months sharing five sets of cutlery, three plates and five bowls it was nice to go and get stocked up on some essentials.

While we were at the mall we spotted a Cash-Converters and so we headed in with our now-redundant camping gear and came out with $100, which took up much less space in the van! We were sad to part with our tent but we think we are going to love the motorhome even more...which could cause problems when it comes to time to leave! 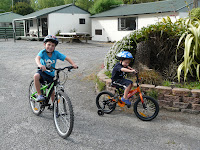 Once we had sorted out essentials it was time to get the boys the bikes we had promised them. We headed to the nearest bike shop and within five minutes the boys had all picked bikes out and were happily cycling around the shop and car park (causing some degree of chaos, but luckily the shop was not too busy). 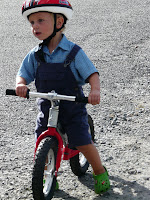 After getting the bikes the van was getting a bit full so we got parked up for the night at a site near Christchurch airport. We discovered that the fridge was not working, which took a while as it can run off mains, battery or gas, so we had to double check each to be sure. We also found that the CD player was not working (David almost got his favourite Norah Jones CD stuck inside it, so we continued to try to get it to play a free Mail on Sunday Christmas CD...which to be honest I have no idea why we brought with us...but with no luck).

Snagging aside we got unpacked and found we have plenty of room for all our belongings, although one of our holdalls is too long to be stored in any of the underseat stores, so it now lives in the bathroom. We all slept well on the first night and Luke slept until 7am, which is very unusual, so we even got a lie in.

This morning we headed back to the Motorhome dealer who tried to get the fridge working, before conceding defeat and arranging for a new one to be fitted tomorrow. He also changed the CD player while we were there...and we got a very strange look when the Christmas CD eventually popped out of the machine and I am not sure that he believed our hasty explanation that we didn't want to lose a good CD in the stereo.

Tomorrow we will hopefully get the fridge changed and will then be fully mobile. Our first stop is Central Otago, where we are going to visit Dean, Diana and Jack, our old friends from the early days on Guernsey who we cannot wait to see again!

Photos of our new home here.