From Christchurch to Cromwell

After getting the fridge sorted in our motorhome (and spending even more money in the shops kitting it out), we could finally head South to Cromwell. We were heading there first as this is where our old friends from Guernsey, Dean, Diana and their son Jack live. We saw some amazing scenery on the way down. The mountains were still covered in snow, Joseph instantly fell in love with the views and was disappointed we did not get high enough to see snow by the roadside. 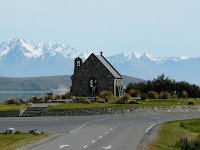 On the way down we spent a night at Lake Tekapo, a beautiful blue lake with a picturesque backdrop of mountains. The lake has mineral deposits in the water which gives it the beautiful colour. We had a great parking spot for the van with the view from our back windows. There was also a tiny church on the lakeside, The Church of the Good Shepard, which had windows inside looking out over the view of the lake and the mountains. It was all very beautiful and would have been peaceful if we had been able to leave the terrible trio in the van, but we enjoyed it despite the slight breach of the peace that comes from three small boys! 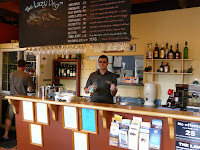 We reached Cromwell and phoned Dean for directions...they were pretty simple...turn right, drive 22km and you can't miss us. We did as instructed and we were soon at their new place. They currently run a restaurant (called the Lazy Dog) and are building a new place and are planning to open on Boxing Day. They have bought a large piece of land and when we arrived the exterior of the building was up, the roof was on and the windows were in. They have also planted an olive grove and vineyard.

We had not seen our friends for over four years, but it just felt like yesterday and Peter and Jack acted as though they had seen each other yesterday. We are going to be staying with them until January (parked up on their land, beside their motorhome) and it feels nice to have somewhere we can be a bit more settled for a while!