My first triathlon (by Peter) 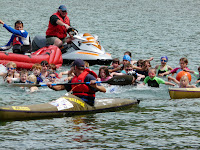 Today I did my first triathlon. It was at a place called Frankton, near Queenstown. It was a 100m lake swim, 4km bike and a 1km run. I had been practising my running and cycling around the field at Jack's restaurant.

First thing this morning I went with Daddy to register for the race, I got my number written on my leg. I was number 161. Then I had to get my bike checked over, they tightened my brakes and pumped up my tyres.

I was in the second wave, so I watched the 5-6 year olds doing their race. When they were finished I had to go for my briefing, I was in the 7-8 year old race.

We all lined up at the start and when they said go we ran into the water. There was over 20 children in my age group and most of them were running in the water, not swimming. I thought the water was too cold to swim, I tried to swim a little bit but I ended up wading along with the other children as there was not very much space. 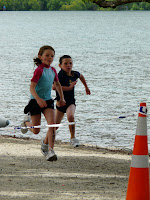 I got out the swim onto the bike, which was a bit hard. I was trying to overtake the person in front, but they kept wobbling about, so I could not get past them until I was in a field.

After the bike I was on to the run, which went from the transition area up to just past our campervan and back. I didn't get a stitch on the run and I only had two short stops to get my breath.

When I finished I was very proud of myself for finishing my first triathlon and Mum and Dad were really proud of me too.

Well done Peter, your first triathalon! Really enjoyed reading your blog and look forward to seeing your next one.

I still remember my first triathlon. I was second last. I Just managed to beat an old lady with a walking stick. Your dad will probably remember it.

When you get back to scotland, we'll build you a super-fast triathlon bike (your dad might want to make it out of papier mache. Don't let him).

Hi Peter. It was really amazing reading your blog about the triathlon. You must be very fit and strong, We are very glad you enjoyed it.We enjoyed seeing the photos of you too. You did really well and I look forward to reading your next blog.