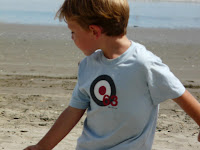 January has been and gone so quickly. We have been up in the North Island for almost a whole month now and having decided that our original one month window was too short we have pushed back our return ferry date to the end of February....that still might be a bit short though. 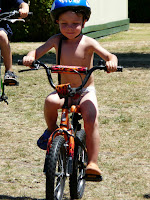 Dan, Fiona, Aaron and Maria headed back to Auckland to fly on to Melbourne - where I hear they are having temperatures slightly above what the UK is experiencing at the moment! We went back down to Taupo for a second stay - so that I could go to the A1 Grand Prix there on the Sunday and to give Nicola a chance to wander round the shops (Joe also learned to ride his bike on our first day there).
The

A1GP was good, the cars were pretty much like Formula 1 cars about five years ago, but a lot less loud. In between the sprint and main races there was a great support programme including NZ's answer to the Red Arrows which, as part of their show, landed on the main straight of the circuit, did a few donuts and took off together. They also raced one of the planes against a drag car, but the plane won too easily. The teams I turned up to support (GB and Lebanon) did rubbish, but the racing was all good.
Next we headed down to Napier on the East coast 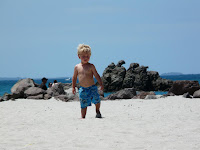 - from what we had heard it didn't sound like there was much to miss and we almost didn't bother, but it turned out to be one of the nicest places we've stayed in NZ. The town centre was unremarkable except for the unusual Art Deco architecture which dominated, but the sea-front was a great place for entertaining the kids (swimming pools and spas, fountains, parks, skate-park etc). We stayed at a campsite slightly west of the city where Peter and Joe made some friends and rode stunts on their bikes with them.
Next we had a long drive North to Gisborne which was another pleasant surprise. There wasn't a whole lot to do, but the kids had a great time on the beach at the campsite and also just riding their bikes around the campsite's road network.
After Gisborne we had another long drive to get back towards civilisation. We stayed in a small council campsite on the beach at a place called Pikowai on the Bay of Plenty and enjoyed a great walk along the beach. The campsite was just west of where the river joined the sea and the effect of the river winding through the beach was amazing - there were cliffs of pure sand which fell away into the river with minimal prodding. We had to wade through the river several times to go West on the beach. Joseph had a close encounter on the way back when he failed to take the agreed safe route at the point where the river and the waves met and was knocked clean off of his feet!
Over t 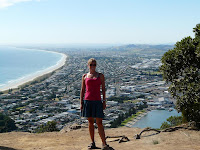 he next few days we headed West along the bay, not covering a lot of miles, but seeing lots of nice places. Mount Maunganui was meant to be tackled on Sunday, but the motorhome broke down (fortunately this happened just after we arrived at the campsite). The AA was called but couldn't do the repair so we had to stay an extra night at the campsite until a friendly local mechanic could come out and replace the rather complex drive belt. Friendly Victor also showed me how to remove the pollen filter so that we could finally get some cool air into the cab when we are driving so he was more than worth the $260 (including parts). We made it up the mountain the following day before it got too hot (it probably made it close to 30 degrees by 10am when we reached the summit). Most of the walkers looked quite surprised to see Peter and Joe tackling the steep climb, but it was just like a Guernsey cliff-walk without the downhills in between the up. (Photos of the climb up Mount Maunganui are here.)
We have now made it up to the Coromandel peninsula where there are no end of scenic views and beaches. Last night we headed out into the wilderness to camp which helps the budget and makes a nice change - less than 5km of "unpaved" road which wasn't too bad. The biggest issue with the unpaved tracks is the state of the bikes afterwords, but the boys enjoy getting the buckets and sponges out so it's not too bad. We had hoped to visit Hot Water Beach on this visit, but the tides didn't work out well, so we might have to squeeze in another drive-past before we head South again.
Good to see lots of photos of the snow on Facebook, we'll be thinking of you when we're on the beach tomorrow.
Dave
Posted by Dave, Nic and the boys at 07:58