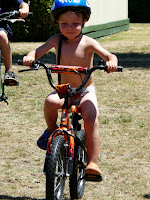 Saturday 24th January (Taupo).
After being told for the umpteenth time to stop riding Luke's bike (Luke has a little lightweight two wheeler without brakes, pedals or training wheels) Joseph asked if we could take the training wheels off of his bike. I quickly looked out the right spanner before he changed his mind and whipped off the wheels. After a couple of wobbly shots he soon discovered that he could ride it without much difficulty, and not just in a straight line as he proceeded to ride to the far end of the campsite, navigate between a bench and a tent, squeeze between a couple of trees and ride back to the van just a few minutes after his first attempt. After a few practise runs he managed a run of ten laps without coming to a stop (a distance of about a quarter of a mile). 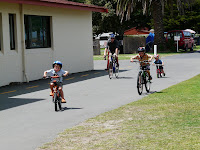 By the time we got to Gisborne, a few days ago, he was riding almost two miles in a run and covered about 5 miles on the bike in one day! He still needs some help to get going again, we visited a bike shop today to see if he would be better with a slightly smaller frame/wheel size, but everything seemed to be either too small or two big, I think he'll get the hang of it pretty soon though.
(Note that in the photos Joseph is wearing only his pants and I'm wearing a silly hat because it was an exceptionally hot day!)

So many first's and adventures on your world trip.