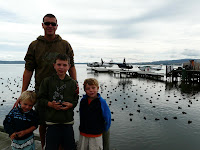 We've not really done a lot of great interest since Hot Water Beach. We've mainly just been chilling out (except the kids who have continued to run riot and Nicola who has been shouting at the kids to get them to stop running riot and also me because I have been worrying about the kids running riot, worrying about the kids being shouted at too much and worrying about the scarlet colour that Nicola is turning; I also occasionally think about the vast cost of the trip, the shortcomings of not earning for a year, the fate of three children with two unemployed parents and rising unemployment) and relaxing. 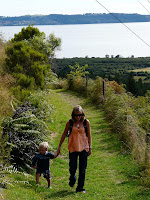 orua and Taupo again. We thought again about delaying our ferry back to the South Island (from 27th Feb) and staying longer in the North, allowing us to spectate at Ironman New Zealand, but ultimately continued south. We made an initially unplanned detour East to visit the Tongariro National Park where we hoped to spend a couple of days getting in some decent walking. On our second day in Tongariro the heavens opened and we decided to carry on south rather than sitting it out in the van (kids bouncing off walls etc). It rained for the whole day and the mercury dropped to levels we hadn't seen since leaving the South Island: we rescheduled our sailing south for 10th March.

We have just spent a couple of days in Palmerston North. Peter is planning to do a triathlon here in a couple of weeks so we have been in the pool (which is next door to the campsite) getting some swim practise in. The "Lido" is an amazing recreation centre with ten pools (a conventional big and small pool for lessons/training, two leisure pools, a circular rapids pool, a shallow warm kids pool, a large spa pool, an outdoor leisure pool, an outdoor 50m pool and a diving pool) and it costs only $9 (approx GBP3.50) for a family ticket which gives unlimited access for the whole day. Highlights for the kids were the rapids pool (Luke and Joe) and jumping from the 10m diving board (Peter). Perfect for a wet day in Palmerston North. We will be back again before the day of the triathlon.

Next stop is down in Wellington for a few days including a visit to an ex Colleague of mine from Standard Life who now lives over here - hopefully our days will be filled with humour fit for a blog.