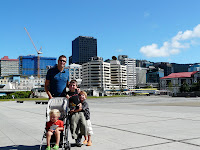 From Palmerston North we headed south to Wellington. We passed through here on our way north in early January, but did not have time to do any sightseeing. We had been told Wellington was known as the windy city and it certainly was living up to its name when we arrived on Sunday afternoon.

Our first stop was in the westerly suburb of Karori, where we went to visit an old friend of David's from his days at Standard Life. We again experienced the excellent kiwi hospitality, as we spent the afternoon relaxing in the garden and catching up with Joe and Sacha while the kids ran around (while their son Charlie who is one looked on cautiously at this invasion of his space!) then had a lovely meal, before having a night in a real bed again (such a luxury!). 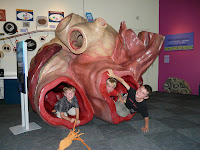 Today the wind had dropped to a breeze and we headed into the city and went to Te Papa, the National Museum of New Zealand. The museum was huge and there was loads to occupy the kids and they made a beeline to the Colossal Squid exhibit. Meanwhile I spent an hour gazing at impressionist masterpieces at the Monet exhibition, a very rare opportunity to see some of my favourite paintings in a world class exhibition.

After a morning in the museum we took a wander round the main part of the city. We both took an instant liking to the city as it seemed a compact but lively place. The business district and shops were intermingled, with the PwC offices above a huge Borders bookshop...perfect I thought! There was a lot of open space at the waterfront and there was a chilled out atmosphere as the city types ate sandwiches while proof reading reports while the teenagers tried to outperform each other jumping off a plank into the sea.

After a relaxing stroll along the waterfront (well as relaxing as you get with three kids asking to go to McDonalds/Burger King constantly...despite having just had lunch) we spent another hour in the museum before heading out of Wellington to find a campsite for the night.