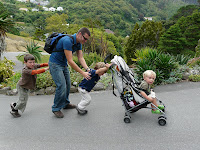 No, Yo-yoing is not some new adrenaline filled thrill-seeker sport exclusive to New Zealand, it's just that we haven't really gone far in the last week. After our first day in Wellington we headed back up the coast to a town called Paraparaumu (or, as we call it for short: Paraparaparaparapara) where we met up with Andy who was visiting on business from Auckland. Andy very generously treated us all to dinner and a drink at a local eaterie by the name of "H" (which was a nice contrast to the long town name).

Next we returned South to Wellington again and stayed a few nights at our new favourite New Zealand campground Camp Elsdon which is located about 20mins North of the City Centre in a place called Porirua. It is our favourite campground mainly because it is the first place where we have really felt we got value for money (like most places there wasn't much to the place, but at less than half the cost of most places on the North Island it was a perfect base for visiting Wellington). This campsite was the location for the now-famous Luke bike riding film (below, click on the video to play it).

Over the next few days we headed into Wellington to visit more of the city. On Friday 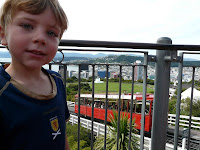 we rode on the cable car up to the botanic gardens; we visited the cable car museum before taking a walk and some lunch. Over the weekend we had a lot of rain so we mainly visited Te Papa where we probably managed to see the majority of exhibits. Nicola's bid to complete the gruelling Marathon Des Sables began when she bought herself a pair of trainers (to be fair she has been for two walks in them, probably not much less than Chris did in February). 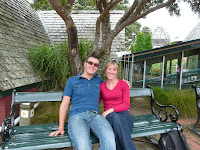 Sunday we left Wellington, deciding that we might as well be on the road whilst the rain continued. After a one night stop on the way up at a Freedom campsite near Opitiki from where we had a nice walk in the forest (we had to camp in the car-park because all of the grass was too muddy but the rain did finally stop in the evening).

We are now back in Palmerston North at the same campsite we visited on the way down last month. The campsite has the "Lido" swimming centre on one side and Victoria Esplanade park on another side - conventiently the venue for the swim, run and transition area of Peter's second triathlon, which is tomorrow (Wednesday). Peter and I have cycled the bike course a couple of times for practise (we measured it at 3.5miles which means that it is quite a bit longer than the advertised 4kms) and this afternoon we visited the transition area (which they were in the process of setting up) and rode around the run course (an accurate 1.5km).

I expect our next blog will be an update from Peter about his latest sporting exploits.
Photos added into previous album
Dave
Posted by Dave, Nic and the boys at 06:48

Dave, Nic and the boys said...

I stopped the camera just before he crashed into me...I wish I'd just let it run on a second longer!