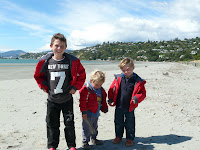 We have been back on the South Island since Wednesday evening, after an uneventful drive down to Wellington (with yet another visit to the museum) followed by an evening ferry over to Picton, where we spent a night before heading to Nelson. We had been planning to head into the Abel Tasman National Park, but after a couple of chilly nights we decided that wilderness camping might be too cold. After researching various buses and boat trips we decided on a trip from Nelson, only to discover that the trip we had chosen was no longer running so we decided to give the Abel Tasman a miss and just start heading south.

We stayed at a great campsite in Nelson (like a mini Eurosite) which had a couple of play areas and mini-golf. The boys had a great time on the mini-golf. As it was out of season David and I could relax, read our books and leave them to it while they played a version of golf that sometimes looked a bit more like hockey! There was a lot of space at the campsite, so the boys did some cycling and Peter and David did the "trim track" each morning. 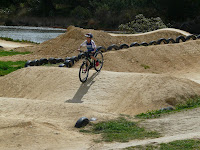 There was a BMX track nearby that Peter enjoyed trying out. Joseph was not brave enough to try it on his bike and David and I were not brave enough to let Luke try it on his bike with no brakes!
After a relaxing few days in Nelson we are presently in Blenheim, which it has to be said is not the most exciting place...we went into town this afternoon and half the shops are closed...on a Saturday afternoon...makes Guernsey seem like a lively place!!
Onward to Kaikoura tomorrow, but we will not be whale watching as under threes are not allowed on the boats!
Some photos here.
Nic
xx
Posted by Dave, Nic and the boys at 06:01