It was a long day...
The Ironman racing started at 6.45am this morning. We are staying at a campsite about 10mins drive away and we wanted to make sure that we got into Taupo early enough to bag a decent parking space, so the alarm clock was set for 5.30am and at 5.45 we set off with the beds still made up in the back of the van - Peter and Joseph are able to lie in bed with seatbelts around them, Luke had to be moved into his car seat which was anchored onto the bed.

We managed to land a brilliant parking spot which gave Nicola and the boys a view of the triathlon swim from bed. I got kitted up and headed out on the bike to watch the race. I watched the swim start, in the dark, down on the beach. At 6.45 the small wave of elite professional athletes headed off behind a Maori wooden boat which was paddled by a group which had just performed a Haka on the beach (very loud and impressive). The main wave, around 1400, made a start at 7am and the noise and sight of such a large number of people in a mass start in the water was quite amazing. 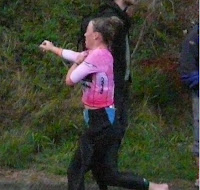 The main field was soon strung out across the lake covering with a distance over a mile between first and last. The first elite male exited the water having completed the 2.4 mile swim in around 45mins with the bulk of the men (including Britain's Stephen Bayliss) and the leading ladies coming out around 50 minutes.
The competitor I had come to support was Bella Bayliss (until November Bella Comerford) from Aberdeen who I used to train/race with when we were Scotland's top junior triathletes. She, of course, has gone on to a succesful professional Ironman career (see her Wikipedia listing here) whilst I became an actuary and, so far, am unworthy of a listing in Wikipedia.
Bella came out of the water just behind a group of girls in about 55 minutes - she has always won her Ironman races coming from behind after the swim, she is a very strong cyclist and runner.
I headed out onto the bike course to shout encouragement at a spot close to town which the cyclists passed twice on the course of 112miles. Bella had moved up into third place but with a gap of six minutes to the leader. Stephen (Bella's husband) was riding well with a group covering second to fourth places.
At second transition Bella had fallen to thirteen minutes behind leader (and her team-mate) Lisbeth Kristensen and was in fourth place. Out on the run I had a tiring time myself cycling up and down the road getting split times for Bella and then feeding them back to her. Over the first 5km she was reeling in the girls ahead bringing the gap down to under 10 minutes. However, the effort on the bike started to tell and after a period of holding the gap steady she began to lose time. She really struggled just after halfway having to walk at times (I did my best to shout words of encouragement, I was worried this might be more annoying than encouraging, but Bella claims that if I hadn't been there she might have just stopped and hidden somewhere!) 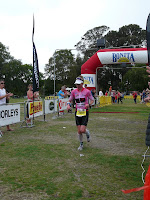 She did get going again but lost a further place to an Australian girl. She came home in a creditable 5th place (meanwhile husband Stephen dropped to 6th by the finish of his race after struggling in the first half of his marathon) having struggled through the marathon in 3hours 20 minutes (a time the average male runner would find acceptable in a straight marathon without the swimming and cycling first!). Her overall time of 9:41 was about 15 minutes slower than last year so she was understandably disappointed (again, the average male athlete would be very happy with a time of under 10 hours - the pros are just in another league).
After watching Bella finish we all took a drive out along the run course to watch other runners, many of whom were still on the first half of their marathons as sunset approached. As I write this back at our campsite with the boys asleep in bed there are many athletes still out there, with the cut-off time for finishers midnight tonight. 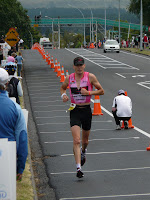 Overall the atmosphere and level of organisation for this event was amazing (there are over 2,000 volunteers organising the event) and the atmosphere was really special with spectators two or three deep in places lining the parts of the course through the town. Maybe next time I'm at an Ironman I'll be on the start-line myself.
Dave
Posted by Dave, Nic and the boys at 08:23