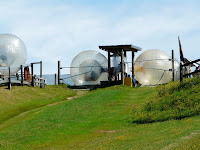 We spent our last couple of days with Dan, Fiona and their kids in Rotorua - famous for its rotten egg smell. The campsite we stayed at was right on the lake, but to get to the beach we had to pass through an area of craters, bubbling mud and steam rising from the ground. The beach itself was also covered in craters with steam coming out of them so we stuck to the pools in the campsite after one visit to the lakeside. The campsite had three natural hot water mineral water pools (varying temperatures) in addition to the standard campsite pool.
Rotorua, like much of New Zealand, attracts tourists by offering a range of whacky activities. Did you know that Zorbing was invented in Rotorua? 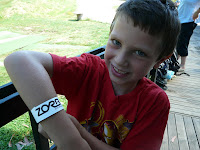 On our full day in Rotorua we headed out early to the Zorb run. Peter and Dan were keen to have a go, but Peter would only go if I went with him, so we signed up for a Zydro each (as opposed to a Zorbit, which Peter was too young for, obviously). A Zydro involves rolling down the hill in a large plastic ball, sloshing around in a few litres of water. All three of us opted for the longer zig-zag run rather than the shorter straight run down the hill (Peter made his decision only at the last minute as he overcame the nerves which hit him when we reached the top of the hill). See Zorbing photos here.
In the afternoon we headed up on a cable car to the top of a hill just outside of Rotorua to a park operated by the same company as the one in Queenstown. This time we decided to try out the downhill luge - a gravity powered racetrack. Dan was able to take Aaron on his knee whilst Luke and Joseph took turns on mine and Peter rode his own. For me the ride down on the Luge was more fun than zorbing (mainly because I could wear my glasses and had control of my own direction) and at a tenth of the cost I expect we'll be back to do it again. 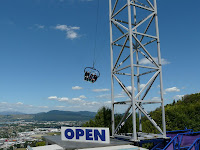 While we were up on the hill Nicola and Dan also rode a huge 'sky-swing'. The swing drew them up to a height of about 20 or 30 metres above the ground before Nicola pulled a release cord which swung them out over the edge of the hill (peaking at a height of 50m above the ground).
The rest of the day was a little gentler as the kids used up their last energy reserves playing in the McDonalds playpark, before we refueled them up again with a shot of sugar and fat.
The following morning we said goodbye to Dan, Fiona, Aaron and baby Maria - who we will next see when we visit Melbourne in May (where hopefully they will be able to put us up in their six bedroom mansion!).
Dave
Posted by Dave, Nic and the boys at 08:24