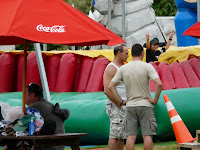 Yesterday we spent the day at a place near to Waitangi and Paihia called Action World. It was a fairly small "theme park" which was crammed with a variety of equipment for kids and adults. We went along in the morning ting to spend a couple of hours, but ended up staying until tea time. Fortunately as we had the campervan in the carpark it was easy to nip out and make up a picnic to get us through the day.
One of the activities was a Gladiators style game in which you tried to push your oponent off of a beam using a giant cotton bud. Dan and I had a couple of games and ended level at 1-1. Peter also gave it a go but struggled to hold the weight of the fighting stick and didn't last long against his slightly taller opponent Dan.
Meanwhile over at the giant inflatable kids slide Nicola was supervising the kids when the dad of some other kids started chatting to her. He was tall with a pretty strong build, mid-fifties. Shortly afterwords Dan pointed out that he was in fact Wolf from Gladiators! It turns out he lives in Auckland and moved down to NZ four years ago - best move he ever made apparently. He also spent most of the day at the park with his wife and three kids and some friends, but we didn't manage to catch him up on the gladiators fighting game - that would have made such a good photo. 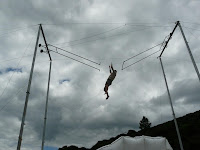 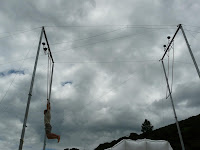 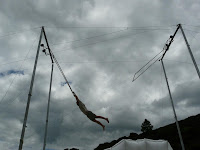 The highlight of my day was a full sized trapeze. When we saw the trapeze school on the pier in Santa Monica last year I had said to Nicola that I would love to have a go - I finally got my chance. After a couple of practise runs I managed to make my first flying leap and succesful catch onto the other side. With a couple more practises I perfected the forward roll dismount (which I had to repeat a few times just to prove it wasn't beginners luck).
After such a good day it was a shame to wake up with painful hands, arms, shoulders and chest this morning - maybe I slept funny?
Pictures are here