Motor cruise around the Bay of Islands

Today we rose early and headed off to Paihia (pronounced like Pie-here) to catch a boat on which we would spend the day cruising around the Bay of Islands. This was a Christmas present from Dan and Fiona. The targets for the day were to see and swim with dolphins (except Nicola who volunteered to watch four children while we did it), navigate through a treacherous hole in a rock and generally enjoy the views on 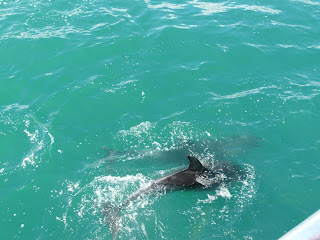 offer in the Bay.

After a quick stop across the water at Russell to pick up the rest of the passengers the captain took a call telling him where we could find a pod of dolphins nearby. Whilst Dan, Fiona Peter and I headed down to get snorkeled up for our swim the others stayed on deck looking out for the dolphins. Unfortunately after reaching the dolphins we were told that there was a baby dolphin in the pod and that we weren't allowed to swim if there were any babies there. Nonetheless we enjoyed a great close up view of the dolphins swimming in the wake of the boat. 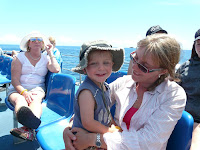 dropping off and picking up deliveries from properties on the islands (originally picking up dairy products, but now mainly delivering wine and newspapers!). After a few drops we made our way out of the bay towards the open sea and Piercy Island which is home to the "Hole in the rock", a natural cave formed by erosion which reaches right through the island. In the second piece of bad luck for the day the sea conditions were too rough for us to navigate through the hole, but we did reverse in from the wider end to get some idea of what it would be like to motor through it. 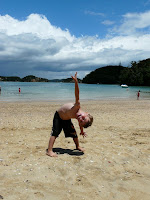 Next stop was lunch, on a large island called Urupukapuka at a small bay called Otehei Bay. The bay contained a lovely sandy beach and a single restaurant (which clearly does a great trade as everyone on the boat had to buy lunch there!). Fiona headed off for a quick glass-bottomed boat trip whilst we refueled and headed down for a swim. We managed to find a nice shady spot at the top of the beach so that Maria could emerge from behind her sun-shade for a lie on the rug. Peter, Aaron, Joseph and Luke all had a good clean and cool off in the sea. 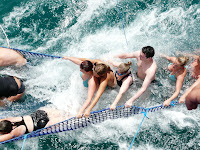 After lunch the crew set up a boom at the side of the boat which held a large rope net. Peter, Dan and I got changed into our swimming gear again and headed down for a dunking in the sea. The netting held about 12 people at a time whilst the captain accelerated, braked and turned sharply causing maximum splashing for those riding the nets. Peter and I rode in a quieter group which contained all of the kids giving us more room to splash about. Dan's group was a bit more intimate!

After all the net-riders had finished the captain had another report of a group of dolphins with no babies, so we kept our bathers on and quickly grabbed snorkels and flippers and managed to get to the front of the dolphin swimming queue. As our group (the first group) started loading in the boom netting ready to be released into the open bay another call came over the speakers - unfortunately a baby had been spotted in the pod, it was all off again. This time it was more frustrating as we had been so close to going in.

After visiting a couple more islands in the bay we finally headed for home after 6.5 hours on the water. We had really good weather all day and the rain just started as we got back to the campsite with three out of four boys asleep after a very exciting day.