Sailing on a Tall Ship in the Bay of Islands 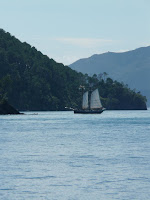 While we were in the Bay of Islands we decided to spend a day sailing on a Tall Ship. We had been given "adventure experience" vouchers for Christmas from Chris and Anna and we decided that a day on the water looked like something we would all enjoy. The ship was the R Tucker Thompson and it is a charitable trust which runs day sailing adventures during the summer then provides sailing training to youth groups over the winter.

We were looking after Aaron (our nephew) and he came along with us, so we had our hands full with four excitable boys going on a pirate ship adventure. 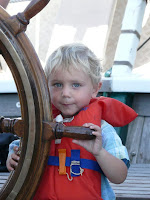 It was an early start in the morning and we boarded the ship for the sailing at 10am. The boys were all very excited about being aboard a "real" pirate ship. We set off from Russel and when we were out of port the engines were turned off and the sails went up. Peter and David helped to hoist up the main sail under the instruction of the friendly crew. Once the sails were up Peter got a quick lesson in coiling the ropes for storage.

It was amazing to be sailing along the water using only the power of the wind. It was so quiet and the main noise (other than our children) was the water splashing off the bows. Once the sails were up it was time for morning tea, when we were served with seemingly endless delicious scones and cups of tea.

When morning tea was finished some of the other people on the boat had a shot of climbing the rigging, while Luke had a turn of taking the helm and steering the boat. Just before lunch we stopped off for an hour at Roberton Island, where the children played on the beach and paddled in the sea (Peter even did some swimming in the lagoon). Then it was back on board for lunch, which was a lovely chicken salad with bread. 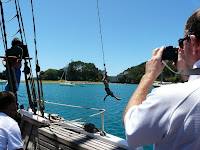 Before we set sail again there was time to try out the "Tucker Bungee" which was a rope swing from which you could jump into the sea. Peter and David both had a go and said it was great fun!

In the afternoon we had a leisurely sail around the bay, while Luke had a sleep and Peter, Joe and Aaron played with their toys and looked for dolphins (we didn't see any...but saw lots of seaweed!).

We all had a fantastic day and were all exhausted by the time we got to bed that evening!