Getting away for a few days 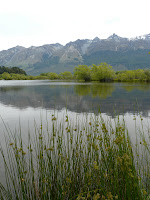 ...to Arrowtown and Glenorchy.

The Lazy DogTM Cafe and Cellar Door opened as planned on Boxing Day 2008 (see pictures of the work involved in getting it opened) so we decided at that stage to get away for a few days and let Dean and Diana get on with running the place.

Our first stop was Arrowtown which we had visited not long before, but we wanted to do a walk along the river (it was raining too heavily last time). We stayed in the same campsite we had had to ourselves on our last 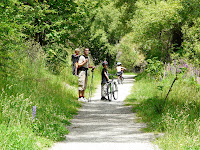 visit to find that the Christmas Holiday brought out a lot of campers. The site was crammed with vans and was more like a car-park than a campsite (worse even than Queenstown's battery camping). Overall this is not a nice place to camp at peak times.

We were lucky to have nice weather this time for the walk (which for Peter and Joseph was a cycle ride since it was a fairly easy path walk) and Luke managed to get out of the back carrier to walk almost 2km of the walk (after which he was exhausted). 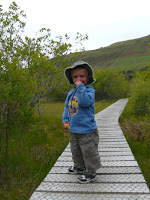 On day 2 we headed through Queenstown and then up along Lake Wakatipu on the winding road up to Glenorchy. There wasn't really much to Glenorchy: a couple of Cafes, a Post Office and small petrol station (and since this is NZ after all there were jet boating trips on the lake and kite surfing). The main purpose of Glenorchy is as a starting point for a whole host of walks (including several day hikes). We started with a small walk around the lagoon which was very pleasant.

We had originally planned to camp at Glenorchy but after checking out the only campsite in town we decided we would rather wilderness camp at a spot we saw off of the road on the way up there. We drove back to Twelve M 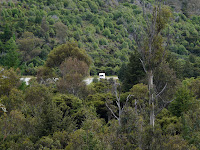 ile Delta, a Department of Conservation site down beside the Lake and had a drive round to find a spot to park up. I've never done off-roading before but I imagine that doing it in an agile 4x4 might be preferable to a 3 tonne motorhome, but we made it back onto relatively flat and level ground and decided a more distant lake view would suffice.

On our last day we set off in the morning for a walk north along the lakeside towards a spot called Bob's Cove. We arrived at a small Cove after 40mins walking (we remain unsure whether this was actually Bob's or someone else's cove).

We have finally managed a run of four straight days without rain (including Christmas Day) and four straight days of walking (including Christmas Day when we walked down to the river from the Lazy Dog). Perhaps I can finally start walking off some of the weight I've accumulated on the trip so far, especially when we head North in a few days and the easy access to bacon rolls in the restaurant kitchen ends!