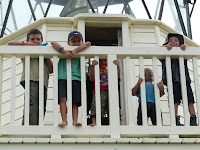 We drove up the West Coast to Westport, where we experienced more pouring rain and howling winds...but managed a walk at the aptly named "Cape Foulwind" before heading inland and up to Picton, where we were getting the ferry to the North Island. The night before the ferry we wilderness camped about 6km outside Picton at the side of the Queen Charlotte Sound. We spent the whole day on the beach, with the van parked about 5 meters away. The sun was shining at last and we spent a day chilling out on the beach, paddling, swimming, reading and sleeping. The weather had taken a distinct turn for the better, with beautiful sunshine...however we have been later informed that the hole in the ozone layer is directly above this part of New Zealand...still it was worth it for some sun (and we had our inch-thick sunscreen slapped on).

The next day we headed into Picton and browsed the shops and got Joseph a long overdue haircut before boarding the ferry in the early afternoon. After a smooth crossing we arrived in Wellington.

We have been motoring up the North Island and have not done much sightseeing to date (other than sights which are directly en-route...like giant carrots). We are heading to Kerikeri in the Bay of Islands where we will be meeting up with David's brother Daniel and his family (including our new neice who we have not yet met!). Needless to say we are very excited about this!

We are presently staying near Auckland with David's cousin Andy, his wife Sam and their two boys. The kids are having a great time together and we think that Andy must work for the NZ tourist board when he is not directing traffic, as he is giving us the hard sell on living in Auckland!
Nic

PS - Andy doesn't really direct traffic...just a soon to be corrected typo on the internet!
Posted by Dave, Nic and the boys at 04:33