A few days in Dunedin 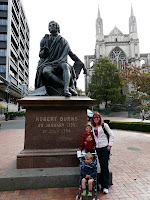 After Easter we headed off for one final trip away from the restaurant and went to Dunedin for a few days. Dunedin is the 'Edinburgh' of the Southern Hemisphere and we felt quite at home on streets such George Street and Hanover Street, while staying at a campsite by the Water of Leith.

On our first day we wandered around the city. We found it to be bustling and cosmopolitan with the impact of a large student poplation evident even though it was the Easter break. It did feel a bit like Edinburgh, especially the icy wind we had on our last day. We saw the statue of Robert Burns (which made us feel quite at home as he was born and lived near Dumfries) and the Cadbury chocolate factory (which the boys were impressed with!). We also took a drive along the port and out the peninsula. 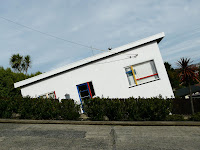 Over the next couple of days we visited the world's steepest street, Baldwin Street, and climbed to the top. We also visited the botanic gardens, where the autum colours were very impressive, but the star attraction was a talking parrot whose phrases included “have a cup of tea”!

We also caught up with Barbara (Diana's mum) who we knew from Guernsey, where she spent a year with Dean and Diana. Barbara had a lovely house and we really enjoyed having a bit of space and sleeping in a bed, we also spent an afternoon sheltering from the wind watching DVD's...David and I finally got to see Short Circuit after listening to it many times in the car on our US road trip.

We could probably have spent more time in Dunedin, but were sadly running out of days, so it was a quick but enjoyable visit.